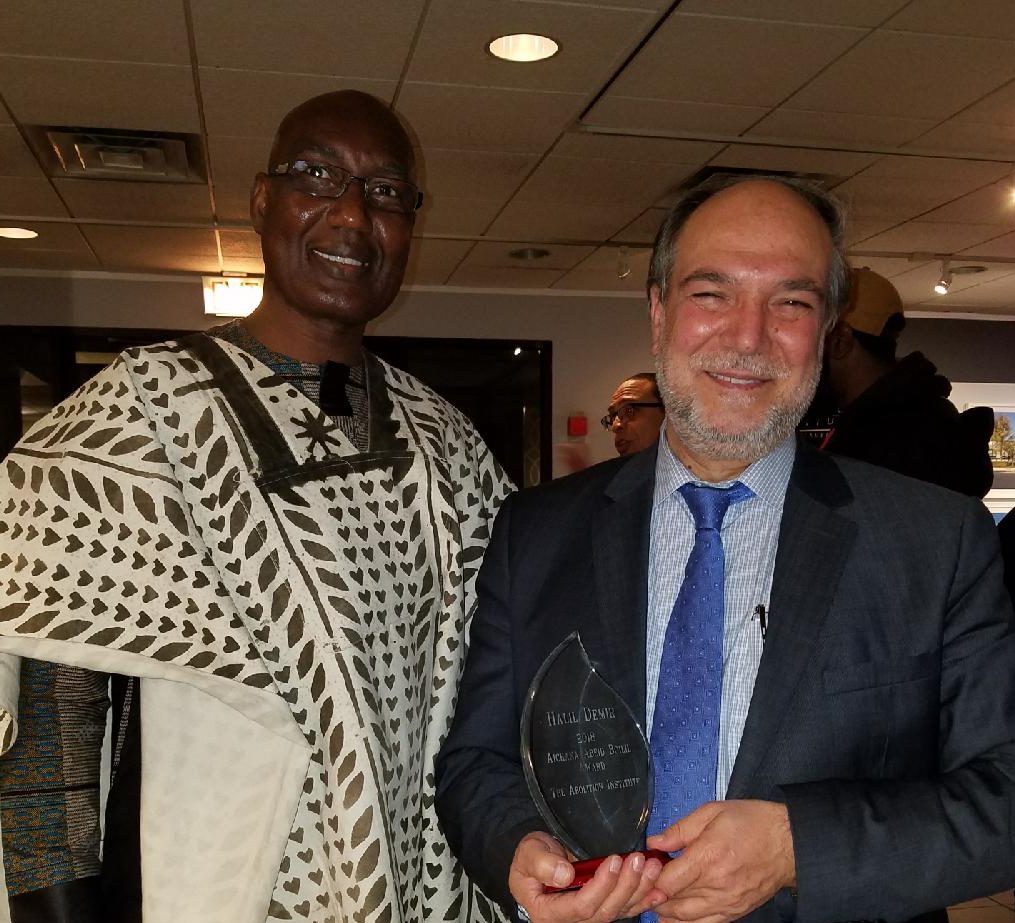 “We can sit and talk and do all this organizing—governments, institutions, nonprofits, and everything else,” said Demir in his unscripted acceptance. “But before all this, you have to ask yourself, ‘What am I doing? What can I do?’”

“I promise you, I will engage. Already, I have told the Organization of Islamic Cooperation: As a Muslim, I am ashamed that in a Muslim land you can still have slavery in the twenty-first century. I am ashamed that tyranny can exist in a Muslim land and the Quran you read every single day teaches you justice. Stand for justice. Speak for justice. And you allow this injustice to go on?

“Today in Mauritania, this is injustice. This is slavery. This tyranny happens. And we all are responsible.”

The Abolition Institute’s 5th Annual Aichana Abeid Boilil Awards, which took place at the DuSable Museum of African American History, commemorates Abraham Lincoln’s birthday by honoring those who fight to end institutionalized slavery and human trafficking in Mauritania, a bastion of both.

Abolition Institute founders named the award for the first Mauritanian woman rescued from slavery by its partner organization SOS Esclaves in the West African country, where she continues to work to abolish slavery.

“Halil’s point is challenge,” said Abolition Board Member Rev. Mitchell Johnson to a surprisingly large audience, given the 10 inches of snow burying Chicago that day. “I think he’s challenged you to stand for something or you’ll fall for anything.” Johnson is also executive director of My Community Plan Foundation, which helps faith leaders and their institutions raise funds for community development.

Led by Jackson’s son Jonathan, the mission received official word that it had failed to clear the trip through proper governmental channels, a dubious explanation since the US Embassy in Mauritania had formally arranged visits for the group with several government ministries.

Demir’s remarks pointedly controverted the misuse of the Quran by some to justify Mauritanian slavery. 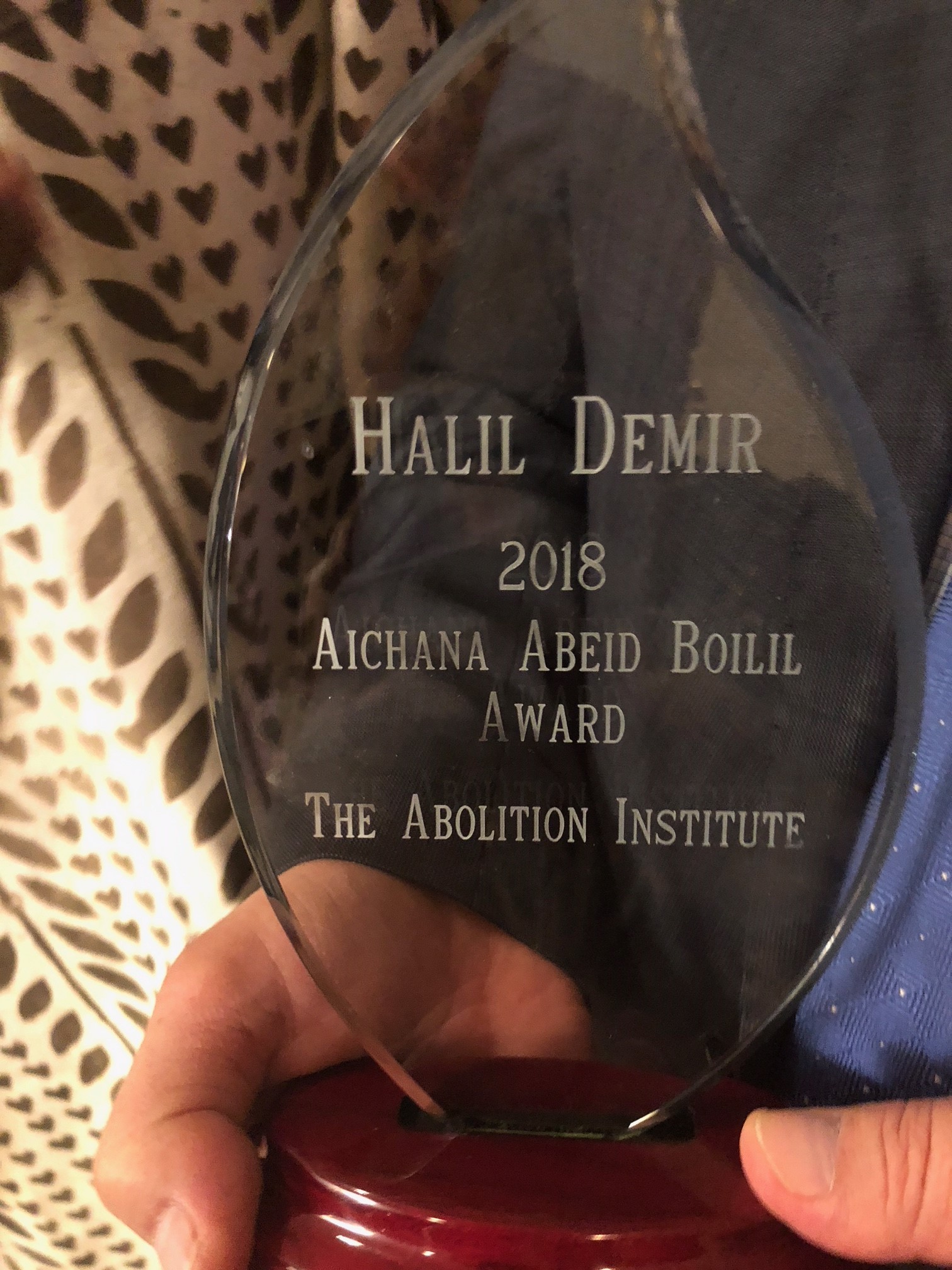 “I was struck by the similarities between the slavery system in Mauritania and in pre-Civil War America—the brutality, the inheritance of entire families in slavery, the dislocation and rupture of family relationships,” writes Sarah Mathewson, Anti-Slavery’s Africa program manager, the oldest abolition organization in the West, founded in London in 1839 to stop the slave trade.

“The difficulties of people leaving slavery in the two countries also bore resemblances, with landlessness typically forcing former slaves into other exploitative arrangements; enduring racism, discrimination and violence against them, and the State finding ways to deny them basic civil rights like voting and education.”

Australia’s Walk Free Movement’s Global Slavery Index estimates 156,000 Mauritanians, 4 percent of the population, live as slaves. Mauritania outlawed slavery in 2007 and toughened laws against its practice in 2015 with a 20-year prison sentence. But it lacks the enforcement to end the deeply imbedded social practice.

“It has repeatedly shown inaction and an absence of will to implement these [abolition] measures,” said Mathewson.

The U.S. formally classifies Mauritania as a Tier 3 human trafficking country, the worst ranking, meaning it neither fully complies with minimum standards or makes significant efforts to do so. This bars Mauritania from certain kinds of U.S. financial assistance.

Despite widespread public perception of slavery’s eradication, this brutal profit-driven institution has staged a major comeback tailored to capital economies and business. An estimated 40 million people worldwide, including in developed countries, make up the prime commodity in the $150-billion modern slavery industry, according to the World Economic Forum.

This led to the End Modern Slavery initiative, adopted in the U.S. in December 2016, and now the Global Fund to End Modern Slavery (GFEMS), modeled after the Global Fund to Fight Aids, TB, and Malaria. With initial funding from the U.S. and the United Kingdom announced at the 48th World Economic Forum in Davos-Klosters, Switzerland, it targets capitalization of $1.5 billion.

“We sat and talked, face to face, with real heroes—people who had been jailed, who had been tortured, whose friends and families had died. These are people who are fighting the fight everyday in a very, very real way. They’re the reason that we do what we do.”

Simpkins’ summed up that human reason for The Abolition Institute in clear and present terms. “Slavery is slavery. It’s human trafficking. It’s exploitation of women. It’s forced labor. It is violence to human dignity.”

The Institute’s urgent work moved Donna Demir, Zakat Foundation health advisor, and a poet, to take up her pen. She recited her piece near the close of the event.

“In my heart, this was something I needed to share with all of you.”  She started.  Her first line seemed a coda to the event.

“There are no rights for being the other’s other.”