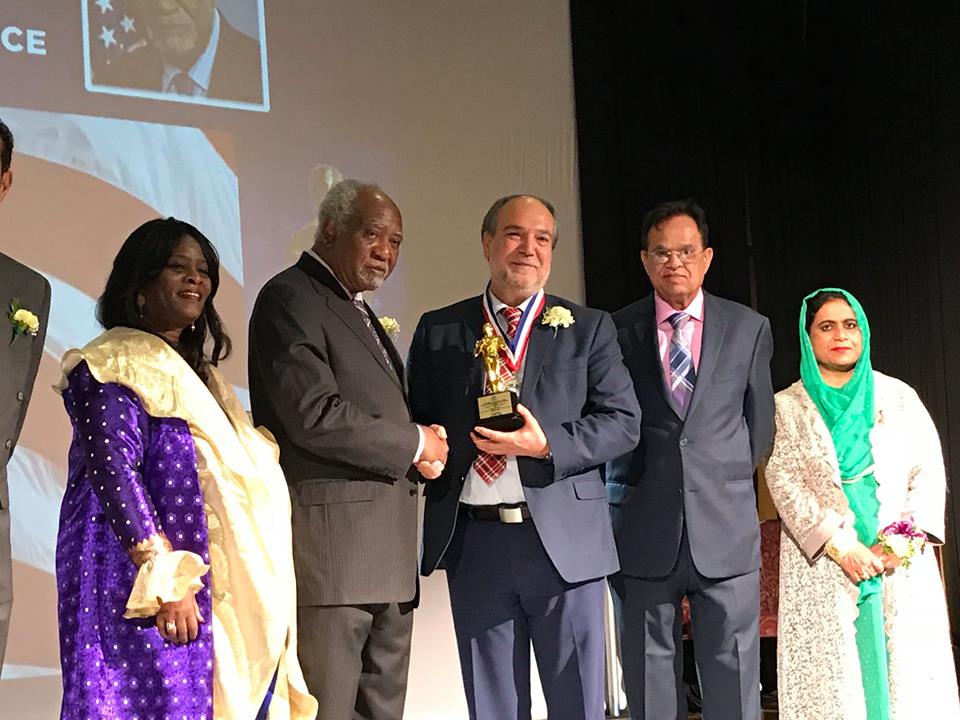 Rolling Meadows, Illinois, Oct. 29 — U.S. Congressman Danny K. Davis’s office has selected Zakat Foundation of America as its Organization of the Year, presenting the award to Halil Demir, its executive director, who called the hundreds in attendance to 30 seconds of silence “on behalf of our Jewish brothers and sisters” gunned down during a Sabbath observance in Pennsylvania.

“It is not in Baghdad but in Pittsburgh, yesterday, where 11 innocent human beings were lost, victims of hate propagated every day in our streets. I accept this on behalf of the millions of refugees who await our services.”

The gunman said he targeted worshipers at the Tree of Life Synagogue, most of them elderly, for the congregation’s work with HIAS, the Hebrew Immigrant Aid Society, a humanitarian aid group providing assistance to refugees coming into the United States for more than 130 years.

“I accept this on behalf of the thousands of homeless on the streets of Chicago in need of our care for them.”

Davis and his 7th Congressional District of Illinois office’s Multi Ethnic Advisory Task Force bestowed the honors at its 8th Annual Congressional Awards Gala at the Meadows Convention Center in recognition of individuals and organizations chosen for their outstanding academic, spiritual, community, business, media, medicinal, and humanitarian contributions in 2018. The district, known for its vibrant diversity, includes downtown Chicago and some of the most prized cultural, educational, healthcare and corporate institutions in the world.

“We are grateful to Congressman Davis, his office, and the Award Jury for recognizing the sacrifice and work of Zakat Foundation’s supporters, staff, and volunteers striving to make the world a better place,” Demir said.

“Congressman Davis has provided this annual multicultural platform that brings so many people together to show the important contributions that faith-based and minority organizations make for this country.”