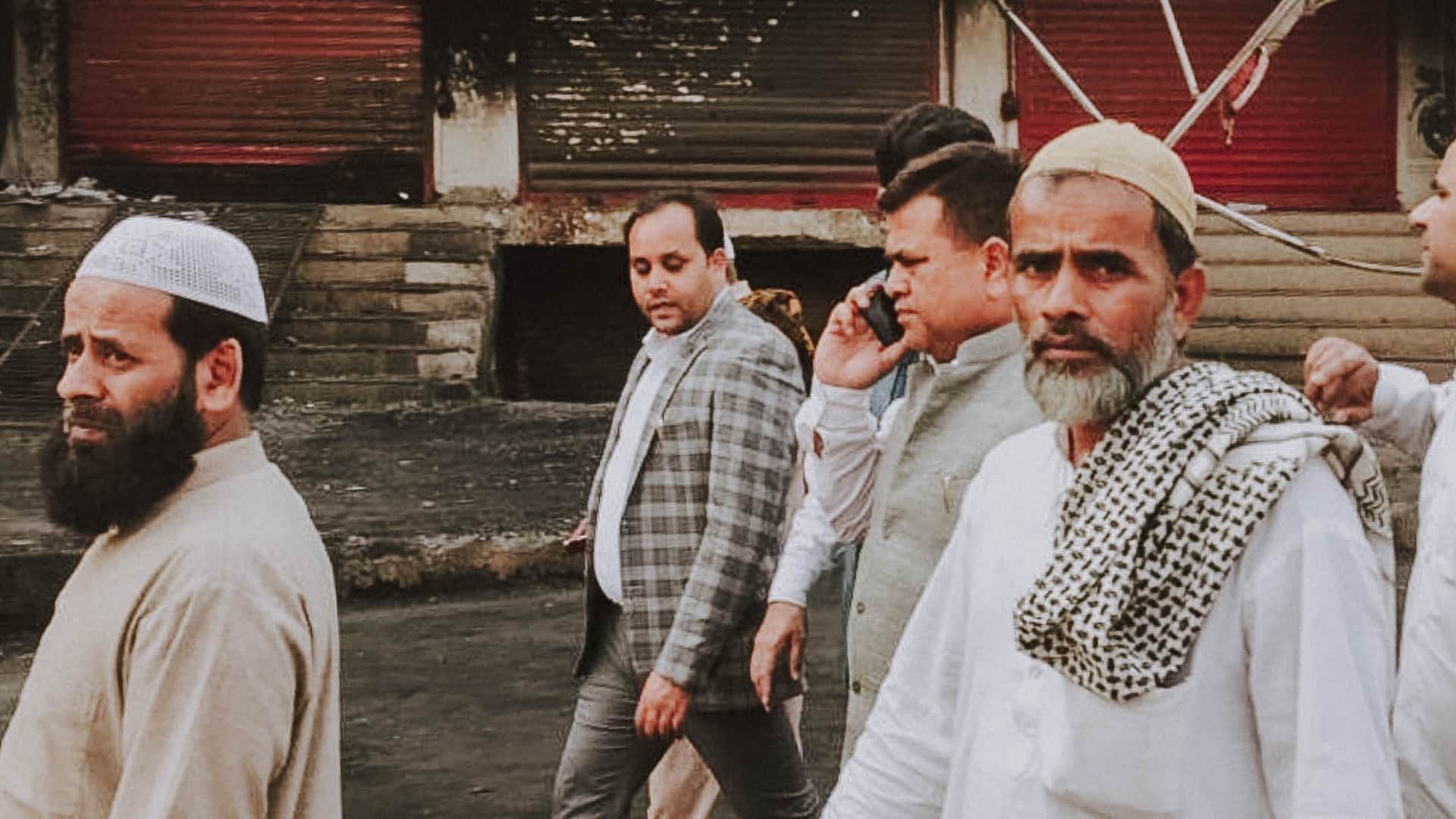 Bridgeview, IL, 19 Mar. 2020 — The charred scope of last month’s unspeakably savage riots against Muslims in north east Delhi is only slowly coming into the world’s grisly view–at the very moment the Coronavirus pandemic is casting its pall.

“Commentators have likened [it] to Kristallnacht” for India’s Muslims, says former United Nations Assistant Secretary-General Ramesh Thakura. “The riots did indeed have elements that recalled … the Night of Broken Glass, symbolizing the shattering of Jewish existence” in 1938 Nazi Germany.

Most of these victims have migrated to porous makeshift shelters in Mustafabad. So have we.

Zakat Foundation’s advance relief experts have been serving there from day one. Now we’re planning to amp up that support with an urgent, nutritional food basket distribution to fortify afflicted families.

Every $50 puts a food basket directly into the hands of these suddenly destitute families, feeding them for a month. Packs contain storable, high-nutrition staples – rice, lentils, oils, masala spice powders, turmeric, flour, sugar, salt, and tea. Zakat Foundation donors will also be sending other daily and specialty use items for hygiene and utility.

Mob action and homelessness has hit Delhi’s Muslims in one of the most dangerous periods of contagion in history. With the wildfire spread of deadly Covid-19, there are no more vulnerable populations in the world than the displaced and refugees.

“We know these victims, burned out from their homes and displaced into crowded camps, are the most vulnerable to the spread of Coronavirus – especially if they don’t have the proper nutrition to keep them strong,” says Demir. “That’s why we’re working double time to rush these food baskets to them.”

“The role of the state government is very important at this point, especially when deadly Coronavirus is spreading in the country,” says public health expert Shubhank Singh. “They are highly vulnerable and living close to one another. It’s up to state health machinery to provide essential items like facemasks and hand sanitizers. Dirt and unhygienic atmosphere can enhance their vulnerability.”

Yet independent accounts tell us that duty’s being largely neglected.

Ankita Upreti from Self-Employed Women’s Association adds: “These people have gone through so much. …There are a lot of problems to deal with, and we have not been able to pay attention to Coronavirus threat properly. For now, we are asking people to maintain cleanliness and wash their hands.”

Our Relief Experts and Partners Make the Difference

In the case of the Delhi emergency response operation, knowledge and experience mean everything.

“In addition to our own Zakat Foundation experts from Delhi, we have very reliable Delhiite relief partners, like Isra Welfare Trust. We know them well. They have exceptional awareness and strong connections with the people,” says Demir.

But time is crucial. Unseasonable rains are compounding the “human”-made catastrophe.

“Whenever it rains, the water enters the camp and our mattresses get drenched,” says Noorjahan. Hindutva boy mobs torched her house in the riot. I, along with 15 other relatives and children, were unable to sleep.”

“These people can’t live in tents any longer,” says one relief volunteer. “It rained and the ground is muddy and wet. We need to urgently get people off the makeshift relief site and into temporary pakka houses or halls till such time as they can find more permanent accommodation.”

Yet government relief coordination remains conspicuously absent. Typically, governments set up logistical information centers after disasters to give relief groups vital information about the big picture while at the same time providing direction on the detailed needs.

That’s not happening in Delhi. The ruling Hindu Chauvinist Bharatiya Janata (or Indian Peoples’) Party (BJP) has a long and dastardly history of inciting anti-Muslim pogroms, especially among the poor – including (and quite openly) this one, whose onset glaringly coincided with President Donald Trump’s state visit.

“Both the victims and the NGOs trying to provide relief are having to find their own way forward without the help that an alert and responsive administration can provide,” Rohit Kumar, writing in The Wired, tells us.

So well-grounded, native awareness is now doubly crucial in the Delhi mob violence relief effort, something, by God’s blessing, Zakat Foundation has abundantly in place. In many areas where the roving rabble of young Hindu chauvinists rampaged, their Muslim victims long lived among them as neighbors.

Anisha, 50, who lived in a house with 15 relatives, mostly grandchildren, could get no police help as she watched a lynch mob of raging young men surround her home and hurl Molotov cocktails.

“They were wearing helmets and waving swords. I recognized them! Some of them were my neighbors – [Hindu] boys I’ve watched grow up. Suddenly they were threatening to kill my family.”

She narrowly escaped with her life and grandchildren. They burnt her house down. She now lives in Mustafabad’s Eidgah relief camp.

Delhi presents relief specialists a troubling segregation maze to navigate. Its increasingly divided population requires considerable familiarity, which Zakat Foundation aid workers have. But this mishmash of patchwork partitioning in the wake of this spasm of lawlessness will now worsen.

“We generally see greater ghettoization in a city after a riot…with city authorities themselves sometimes reorganizing neighborhoods that entrench that segregation,” says Miloon Kothari, a housing and human rights expert.

“Apartheid cities are being created due to political, planning, and gentrification processes that divide communities further, impoverish the poor, and make it easier to target vulnerable communities again.”

Mumbai’s deadly anti-Muslim rioting in 1992-93, and in Ahmedabad in 2002, pushed Muslims out of the city’s mixed neighborhoods to its outskirts, notes Ahmedabad University Prof. Darshani Mahadevia.

“The Muslim poor especially ... choose to live in all-Muslim neighborhoods because they feel insecure,” she says. “Segregation keeps the communal pot boiling for political reasons also.”

This has led to the phenomenon of communal “iron gating.” The residents of segregated Muslim and Hindu neighborhoods, on their own, mostly without municipal help or approval, are funding and erecting seven-foot high iron gates they can lock and man for permitted passage. At least 23 have gone up in north east Delhi since the anti-Muslim mob attacks last month.

In many areas, the new barriers are shutting out Muslim homeowners who fled the Hindu nationalist gangs.

“They (Muslims) haven’t returned since February 24,” said Hindu resident Usha Tomar. “We do not know where they have gone. Anyway, we never spoke to them. Maybe they have found a better place to live. Soon, we will have gates at the front and back of every lane. We do not need their help for that.”

That “better” place is in reality the camps or enclave hideaways where at least 15,000 traumatized Muslims now huddle, having lost everything.

“That is why our food baskets and supplies are so urgently needed now,” says Demir, as a first step to reestablishing the dislocated. “Delhi’s weather will soon grow unbearably stifling, and with the compounding problems of Coronavirus and the worst air pollution in the world, many of the victims will not survive it without our help, with Allah’s blessings.”

“Our Delhi relief workers literally risk their lives and persecution,” says Demir. “They are so committed to getting help to these poor victims. I love them. We want to match their brave commitment by providing them the relief goods they can deliver. All of us must support their heroic work.”

India’s own independent National Herald reports that “Delhi government officials and the police have been stopping people…from providing relief to those affected by the worst orchestrated communal violence in north east Delhi in decades,” including six graduate students from Jamia Millia Islamia university, part of a survey project documenting human, property, and psychological losses of the victims.

Police try also to systematically intimidate relief workers, journalists, and volunteer lawyers — all providing aid to relief camp victims. They record their names and in some cases have tried to photograph them.

“At the entrance of the lane to the [Eidgah] relief camp, [they] ordered registration of everyone heading into the camp…even if they have government accreditation cards,” said one reporter. They restrict media to narrow, “specific timings, 12 noon to 1 pm, when journalists would be allowed [in].”

But the relief workers are not so easily intimidated. “As soon as we saw the police photographing us, we questioned them why.” They couldn’t produce legal notification. “So [we made them] delete the photographs,” said one relief volunteer.

Rush your $50 food basket to these displaced and traumatized families who have lost everything. Please.